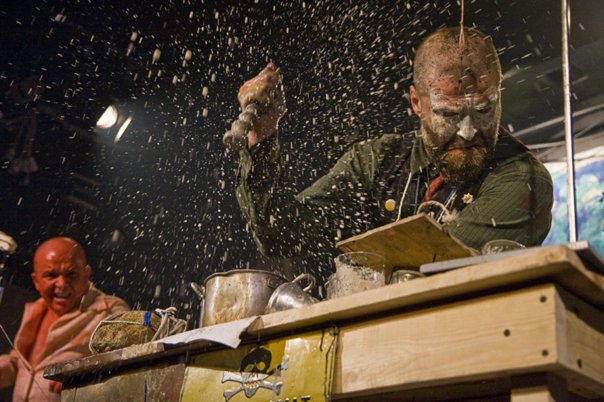 About a performance:
Hovewer the postindustrial cabareth “Plug-n-Play” seems to be very radical and hooligan’s theatre piece, the atmotsphear of this show doesn’t remind theatre at all.

Spectators coming to this event are free to find their place and duty; sit next to the barcounter and through sometimes tomatos and garlick to the actors or dance on the small area next to the stage. Even actors anknowlege early that it is alowd to smoke and drink alchogol, speak and use photo flash, leave on mobile phones.Seems everything is possible, but so difficult to interupt yourself from the action on the stage.

There is hardly planed improvisation by three participants in front of the audience by DJ, performer and painter. Even two last always change each other and so hard to catch which (what) role they play. But, is that a role? So natural and alive actors in each moment.

During the eveining in front of our eyes the “operators of time and space” create the big picture and than in few minutes destroy one by rotten vegetables. DJ mixing and sampling havyjass and electropop with passion and hard activity in last minutes trys to protect the drawing by his body, but under the rain of tomatos and bananas from many hands pushed to make himself the joker’s harakiry…

Almost during the hour the brave performers fight with enthropies and own glamsy in cascade of stories and usually they win. Those spectators who are lucky to stay in the aproaching zone by the actors can get the provocative coctail from tears, vodka and ice or buterbroad (sandwich) made as a result of psevdo (fake) terrorist acts.

“Plug-n-Play” is the story strictly dedicated to the naughty kid who lives in each adult and who shout with exaltation:
“Ehh! I want to do the same!”