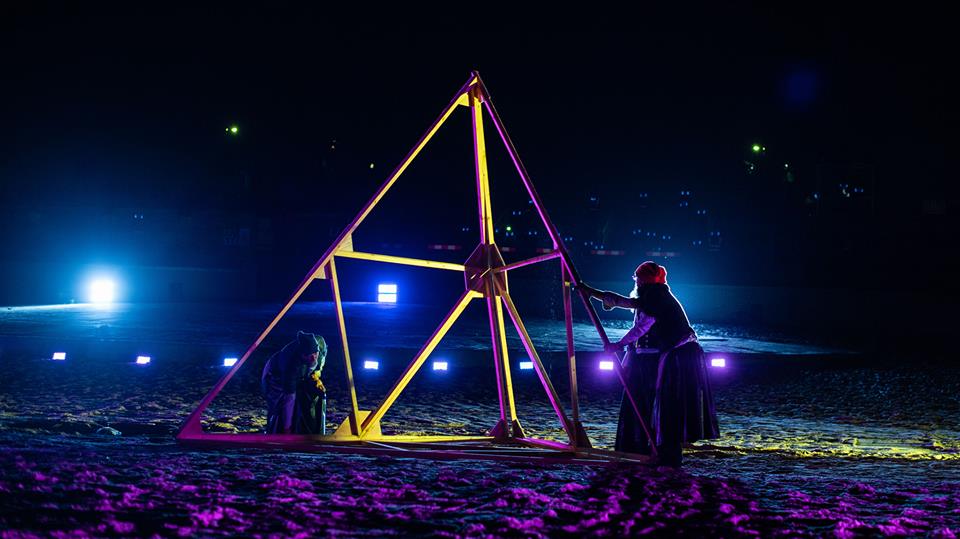 On 21st October 2018 on a calm moonlit evening we were invited to Aberdeen Beach to view “Rewind Perspective”, a new piece of site-specific physical theatre created by AKHE (Russia) and young people of Aberdeen as part of the National Theatre of Scotland Futureproof festival.

Upon arrival, we were presented with headphones to wear and left to wait patiently in the auditorium of a leisure centre. Nobody knew what to expect, we all waited in uncertain anticipation, heightened when a row of bobble headed, identically dressed young people marched past us in military fashion to exit the building.

As the performance time approached we were led across the dark field and escorted to a clearing at the beach. The spectacle awaiting us was already breathtaking. A neat cove in the darkness with the beach area illuminated in a glow of beautiful light and our bobble headed friends lined up like playing cards along the front of our temporary ‘stage’.

We sat on cold steps, obediently wearing our headphones as the cold started to set in. We could hear the sea through our headphones, it’s volume increased from that of the natural sound of our waves. It was with a certain element of smugness that I could see people walking their dogs, and gathering around our beautiful scene without being immersed fully in this creative world. They could see what we could see, but could not hear our privileged soundscape.

Along with our bobble headed friends, there was a beautifully lit pyramid, glowing with an ephemeral quality which was emphasised as the eerie slightly off key music started to play in our ears. We could see across the gloom 3 figures who glided from the darkness to start performing in our set. They started to construct some kind of triangle, all the while using physicality which appeared to symbolise movement on the sea. Sometimes moving as the sea, more so as the sailors or boat.

The eerie music, ever present bobble heads and now these strange performers added a sense of unease to our scene, emphasised by the dipping temperature. Nonetheless, we were all engaged, committed in our own private world of our headphones.

There was a sense of relief when rhythmic music started to kick in, a more familiar sound which awoke our bobble headed friends to join the movement. Our trio of characters started to break apart our strange large pyramid and reconstruct its inner next to the original. All in all though the production we ended up with 4 clear areas of triangular structures, which the men continued to work with throughout.

A wonderful moment occurred when the music reached a crescendo of excitement and our bobble heads, whom I now noticed also wore headphones, started dancing manically to the beat. We were entranced, and I realised that the bobble heads were connected to us, they could hear the music that our unknowing public observers could not. I found myself wondering how the ‘non hearers’ felt that they were missing out on the full immersive experience.

The deconstruction and reconstruction of the pyramids continued with the men frantically pouring water, beautifully lit with the superb lighting design of the piece which made the water glitter like molten gold in the air. Our bobble heads leapt into physical duets with elastic, at once strained and tense but also beautifully connected. Later they had solo pieces working with scarves serving as a display of saying goodbye, and being reunited – an example of the effectiveness of simple physical gestures to demonstrate complex emotional states.

Our trio meanwhile took to digging a hole in one deconstructed pyramid, which they would return to later. We observed a lit fireball being used as a football, which then ignited the corners of the fourth pyramid and was suspended, a swinging pendulum at the centre of the construction. During this chaos of fire, our bobble heads appeared with red fabric and items which they danced with, wore and transported around the busy scene. Without warning we became aware that the fire had spread to one of the performers who moved further and further to the sea as our bobble heads slowly found stillness with the image of our man on fire, a second in the dug hole and a third poised on the third construction.

The company let this beat drop, allowing us to take a breath at the isolation of our lone burning figure in the sea. Then the movement started again. Our man on fire, who was now smouldering, climbed into the original pyramid and then, joined by his fellows, started to move the huge structure across the scene. The white pyramid was incredible in its angular design, each direction it was put in gave us a different perspective of it’s shape, a fact echoed in the smaller kites our bobble heads were now flying. The large pyramids transported across the scene to a dark corner where it was let go to fly into the sky. We were left with a moment of stillness with the company and the pyramid kites until the inevitable blackout instructed us that the spell was broken.

We applauded as one does at a theatre show, but the sense of unease and the unfinished quality lay in the crisp air. We removed our headphones and looked around, and there was a moment of realisation that we had all been under the same spell and were now free to go into the cold night.

There was no doubt this was a high quality and beautiful installation, immersive in its nature in a polar opposite way to our last Futureproof show (Hacks for the Future). The images have remained with me and I am still reflecting on what this art said to me.

I came home and did a bit of research on Alexander Graham Bell, the inventor who inspired the piece. It was a revelation to learn that much of his inventions were based around communication of deaf or mute individuals, having had both a mother and a wife who were deaf. This resonated with my observation of this piece, the feeling that we were in a different world from our other members of the public, the technology of our headphones putting us at an advantage audiologically of being able to hear the show as well as see the spectacle.

I also learned of the loss of his two brothers to tuberculosis which I wonder if had connection to the 3 unnamed characters, ever present through the journey. I read of his experimentation with light technology, with aerospace using kites all references which were thoughtfully included in this production.

I don’t fully understand how this whole production was created and I am still finding connections between the piece and it’s historical inspiration, but then I am not sure we are supposed to. As with all great art, we have been left to create our own interpretations. It raised questions for me around how we communicate, how ideas are formed and how we can deconstruct what we think to be true, only to find a different journey to our conclusions. The not being afraid to try, to experiment with new concepts even if they don’t quite make sense yet.

Alexander Graham Bell invented the telephone, but he also patented early technology which would lead to fiberoptic technology, 100 years before it’s time. He had awareness of solar panels and understood much of our future before it became possible. He was a pioneer of later technology which we all now have come to rely on as part of modern life. This fact is symbolised in this abstract modern installation, inspiring innovators of the future. We don’t need to fully understand yet, we just need to be brave, try new things and allow space for creative experimentation.

Not all of Alexander Bell’s ideas would be accepted in our modern world, with good reason. He was a founding father of Eugenics, and believed we needed mandatory sterilisation for those who may procreate and pass on faulty genes, specifically in his case that of being deaf. This early belief system so similar to that of Nazi Germany, makes me wonder if this had some influence of the choice of our utilitarian bobble headed nation, all equal and uniform in visual perfection.

I am still reflecting on this production and reshaping my conclusions which I feel is a mark of its effectiveness as a piece of socially engaged art. I want to ask questions, I have a desire to understand, discuss, reflect. The choice of setting, the time of evening, the people I was with all have a bearing on this experience and that cannot be repeated. It was a fully immersive, sensory piece and I feel privileged to have been one of the lucky people to be part of it.